I am a Myk Freedman. You are maybe a Myk Freedman too, but you maybe are not. Lap steel guitarist Myk Freedman is definitely THE Myk Freeman, and he put a band together some years ago to play his amazing songs. Myk has two full books of one page songs that can be played in a variety of styles at a variety of tempos, and still work to make you feel things. A year ago, to the day, we recorded this music in Brooklyn. That day (and most days) the Myk Freedman’s were Myk Freedman (lap steel guitar), Patrick Breiner (reeds), Kenny Warren (trumpet), Jason Vance (banjo/spoons), myself on bass, and Carlo Costa (drums). You’ll notice many frequent collaborators in there, which is a good sign for a great recording. The record came out today, exactly one year after it was recorded. It is good and it is different and I think many of you out there will enjoy it. Feel free to take a few free listens via Bandcamp. If you like what you hear I recommend buying it.

The very fine people at happylucky no. 1 records (mainly and completely Liane Fredel, who paid for the recording, musicians, pressing, and did the amazing art and layout herself) did a great thing for us by putting out this record. We’d love to pay them back in some small part by selling a few of these and getting it heard by the world. I hope you enjoy it! If you do, please spread the word. You can check it all out here:

A long-standing band of mine, Party Pack Ice, recorded an album last year. The playing on the record sounds great, and I’m currently working with Nathaniel Morgan to finish the mixes. We should have a finished product by the Spring time. One of my favorite tracks on the album had two versions that I really loved, but it didn’t make sense to have the same song on the album twice. So I have released the alternate take of a song called The Stephanies via Bandcamp. Please enjoy the track free of charge! It was mixed and rough mastered by Nathaniel Morgan, and features these awesome musicians:

I’m very excited that a band that has been in the works for almost a year now has finally played it’s first (of hopefully many more to come) gig. Haverchuck is a sextet I formed last summer to play some new music, written specifically with these people in mind. The band features Nathaniel Morgan, Eric Trudel, and Josh Sinton on reeds, Jonathan Goldberger on guitar, myself on bass, and Devin Gray on drums. I must say that is an awesome an energetic combination of people, and I really love the way that they play my music.

Our first performance was at Douglass Street Music Collective as part of the great Drinks With Friends series co-curated by Josh Sinton, Will McEvoy, and Jake Henry. The music still has some growing to do, and maybe some cleaning up, but for a first performance the energy and the vibe are already there, which is often the hardest part. Anybody can rehearse tough music and get it clean, right? These guys get the music, and they play it in a way that makes me super excited to do more with it. More to come on that. For now I’m happy to share a clip from the performance, which is the first piece I wrote for the band. It would typically feature a long and awesome duo intro by Josh and Nathaniel, but for time and website space I had to cut it a bit short. It does feature a rager of a solo by Jonathan. Enjoy, and thanks for listening!

The Party Pack ICE performance last night was super fun…so much fun that I don’t think we’ll ever return to just being the trio of Party Pack. Huge thanks to Aryeh Kobrinsky for putting the night together…two awesome bands followed us, and it was a great night of music all around. PP ICE is Eric Trudel & Patrick Breiner-tenors, Dustin Carlson-guitar, AH-bass, compositions, and Nathan Ellman-Bell-drums. Here’s the full set in mp3 format…feel free to download and pass along to a friend. Enjoy!

Oh boy it’s been since April since I updated this guy. Lots of teaching in that time, and a good amount of playing with some great people and great friends. A couple of things to watch out for in the coming months:

1) Lubbock, a 10-piece ensemble that I co-lead with Dave Ballou, is finally mixing the album we recorded back in January. It was recorded in the studio, but all in one day, and minimal takes of everything. The band was on though, so I think there is some great music to be heard on this thing, and it’s one of those live-in-the-studio sort of deals. Some previews of that coming soon. The entire band is Cam Collins, Eric Trudel, Colin Renick, and John Dierker-reeds, Dave Ballou, Brent Madsen, and Jim McFalls-brass, and Chris Pumphrey, myself, and Nathan Ellman-Bell in the rhythm section.

2) Eric Trudel Trio has been gaining some steam lately, having played a couple of gigs in the past couple weeks. Some accidentally, some intentional, but the important thing is that they happened and they were fun. Eric, Nathan and I have been playing trio together since 2007 in Baltimore, so the comfort level is high in that group and we have a good time. Good times with good dudes. I have a weekly gig at Kif in Ft. Greene every Monday night from 8-10p, and this week Eric and Nathan are both subbing, so it should be a fun time and worth checking out. Oh, and no cover! Here’s a clip of that trio playing the tune Daniella by Hurray for the Riff Raff. It features a bass solo first, and might be the only bass solo on this entire website. Enjoy!

3) Lots of fun stuff coming up in the performances section of this page. Danny Gouker’s Signal Problems have a bunch of shows coming up in the new few months in preparation of recording their debut album. That band consists of all of my roommates, and we have fun playing music together. Lastly Out of Your Head Brooklyn has gotten off to a wildly successful start, and I’m so excited by all the support it is getting. Our next show will be Sunday, August 5 at Freddy’s Bar and Backroom, and will feature Gerald Cleaver, Oscar Noriega, Andrew Bishop, Kenny Warren, JP Schlegelmilch, Ben Syversen, Greg Chudzik, Nathan Ellman-Bell, and Kate Pittman. Wooooo…hope to see you soon! 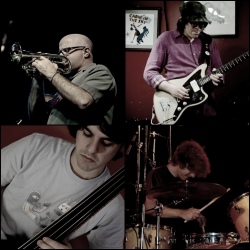 BeepHonk had a really fun gig last week at The Windup Space in Baltimore. Thanks to Nick Horner for arranging the whole thing, which was a really fun night of music. BeepHonk is a success story from the Out of Your Head Collective…we were formed as a one-time-only band for the weekly series and enjoyed playing so much that we made it a regular thing. BeepHonk is Dave Ballou-trumpet; Anthony Pirog-guitar; AH-bass; and Mike Kuhl-drums. Stay tuned for more dates with this group…it’s a fun one.  Enjoy some free mp3’s of the set:

Sinking Ship is a band that I started with my great friend TJ Huff.  In a way it sort of started when we played together in a Faith No More cover band on Halloween 2002 with Nate Rappole (who played right before Sinking Ship this past show under his solo act of Gull…it ruled).  In a way it’s a completely new thing, and our attempt to revisit the energy we gave playing in punk bands in high school, but with some twists.  TJ wrote all of the current music. and the best way to describe it is mid-90’s pirate rock, chock full of improvisation, but could easily be the soundtrack to a playstation snowboarding game. We enlisted my frequent collaborators Eric Trudel (sax) and Nathan Ellman-Bell (drums) to round out the band.

The show at Freddy’s was great.  TJ was not feeling so well, at times seeming like he may vomit on me mid-set, and also his second-most-important pedal broke right before we played.  But playing with him and listening back I wouldn’t have had any idea that this guy was feeling bad…he played great, and did some funny things in the process.  Below is a chronological photo documentation of the set, and the unedited full set mp3 (after a shaky start we really get going!).  Awesome photos by Fiamma Piacentini (Huff).

What’s That Noise?–starting to feel it.

We’ve Sprung a Leak–TJ goes down.

My good friend and great trumpeteer Jake Henry is taking over a monthly series at the LaunchPad in Brooklyn called Sounds and Sounds. Jake will be presenting concerts of creative and improvised music the second Saturday of every month. This past Saturday was the first concert of the series and I was excited when Jake asked me to put a group together for it.

The group featured on the concert was a brand new band (this was our first ever performance as well) featuring Kenny Warren-trumpet; Mike Gamble-guitar; Devin Gray-drums; and myself on bass. We premiered a piece of mine entitled Airports, and it was truly an honor to have these amazing musicians play my music and to be able to perform with them.

I traveled a lot by plane this past Summer/Fall and this piece was conceived as a way to productively use my time while sitting alone in an airport. Not a very clever title. Anyway, the concept is that it’s written for quartet in five movements. Each movement three people have a written part and one person is left to improvise their own part. The final movement is through-composed for all four musicians, and each movement is open for group improvisation. This particular performance took the form of one long piece, with improvised sections connecting the movements. I’ve provided a link to the LaunchPad performance below. Feel free to share with your friends, download, put in your computers recycle bin, etc.

John Dierker is one of my favorite musicians in the whole word, both to play with and to listen to. I have the pleasure of working with him often as members of Quartet Offensive and Lubbock, and in a number of varied improvised ensembles (an impromptu duo performance as a result of two people not showing up for OOYH is one of my favorite musical memories…and one of my biggest regrets for not having my mp3 recorder). He is truly one of the gems in the Baltimore creative and improvised music scene. Other people recognize this as well, which is why the Red Room features John every holiday season in a year-end improvised blowout concert. The band he put together this year was top-notch, and I was honored to perform with these amazing musicians and great friends. This years holiday ensemble featured John on reeds; Dave Ballou-trumpet; Marc Miller-guitar; Chris Pumphrey-rhodes; AH-bass; and Will Redman-drums. More video to come…this is the first segment from the performance. Enjoy!

Just a quick post to share some live recordings that I’ve been a part of lately. BeepHonk is a new band that I’m REALLY excited about. We were formed as a one-time-only ensemble as part of the Out of Your Head Collective, and the band played so well together that we decided to continue as a fully functional band. There are some very loose compositions written for the band that we sometimes play and sometimes ignore. In this particular Birkfest set (our third gig, including the OOYH set) we more chose to ignore the written material. The band is Dave Ballou-trumpet, Anthony Pirog-guitar, AH-bass, and Mike Kuhl-drums. Stay tuned for more from this band…more gigs and a record hopefully in the works soon. Enjoy: